An unlikely trio of retirees try to solve a man’s death, his strange will, and the 250-year-old colonial period mystery of the controversial and long-vanished First American Declaration of Independence, actions which – if successful – will change United States history. That is, if they don’t die trying.

It’s modern day in the New South City of Charlotte, North Carolina, when three retirees at the Independence Retirement Community, a/k/a The Indie, team up to solve two mysteries related to the death of a 96-year-old resident. Why was his manuscript about the Mecklenburg Declaration of Independence missing when they found his body? And why did his handwritten will dated the day he died disinherit his beloved granddaughter (his only heir), and leave his $50 million fortune to Sue Ellen Parker, the most despised resident at the Indie?

Deadly Declarations plunges readers into the world of history and retirement, where getting older is a combination of fear, doubt, humor, and new life, and then transports readers to the courtroom and to the Virginia countryside to prove that age is just a number when searching for and finding the truth about the past. 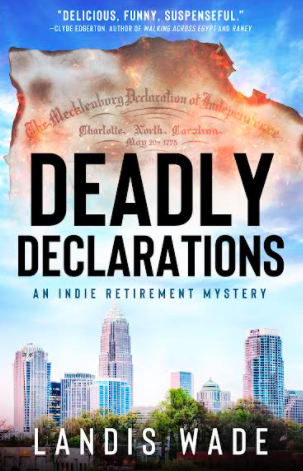 A sizzling combination of historical mystery, courtroom drama, and warm, burgeoning friendships in a retirement community. I tried to stop reading Deadly Declarations. I simply couldn’t put it down.”

Landis Wade is a recovering trial lawyer, host of Charlotte Readers Podcast, and author of books and stories whose third book—The Christmas Redemption—won the Holiday category of the 12th Annual National Indie Excellence Awards, and was the 2018 Holiday category Honorable Mention in the 10th Annual Readers’ Favorite Awards. He won the 2016 North Carolina State Bar short story contest for The Deliberation and received awards for his non-fiction pieces, The Cape Fear Debacle and First Dance. His short work has appeared in Writersdigest.com, The Charlotte Observer, Flying South, Fiction on the Web and in more than six anthologies, including by Daniel Boone Footsteps.

Deadly Declarations will be available for purchase at the event and can be personalized by the author.
Proceeds benefit the Charlotte Mecklenburg Library Foundation.