This year’s lineup features history, poetry, and everything in between!

The Ghosts of Eden Park 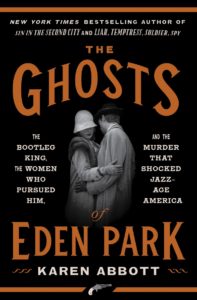 Meet George Remus: teetotaling bootlegger, erudite madman, and real-life inspiration for F. Scott Fitzgerald’s Jay Gatsby. In her new book, The Ghosts of Eden Park: The Bootleg King, the Women Who Pursued Him, and the Murder that Shocked Jazz-Age America, published to coincide with the centenary of Prohibition, New York Times best-selling author Karen Abbott takes readers into the dazzling world Remus would create—only to lose it all in spectacular fashion.

In October 1919, Remus—an impoverished German immigrant with an alcoholic father—quit his law practice in Chicago and moved to Cincinnati, where he launched the most successful bootlegging operation in American history. Long before Al Capone became a household name, Remus used intellect rather than systematic violence to build his staggering empire. Known as the “King of the Bootleggers,” he and his glamorous second wife, Imogene, threw lavish parties at their mansion with generous gifts for attendees: diamond watches for the men, brand new cars for the women, and $1,000 bills tucked under everyone’s plate.

Pioneering Assistant Attorney General Mabel Walker Willebrandt was determined to prove that a woman was up to the job—and set her sights on Remus. She dispatched her “ace” Prohibition agent, Franklin Dodge, to investigate Remus’s empire. It was a decision with deadly consequences: Dodge and Imogene began an affair and plotted to ruin him, sparking a bitter feud that reached the highest levels of government—and that could only end in murder. 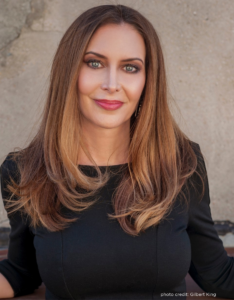 Karen Abbott brings her celebrated story-telling ability to bear in The Ghosts of Eden Park, crafting a narrative that captures the style and extravagance of Remus’s remarkable life and momentous era—and the dark undertones hiding beneath the glamour. An impeccably researched history filled with high drama, scandal, and a love triangle, The Ghosts of Eden Park is an unforgettable read.

Karen Abbott is the New York Times bestselling author of Sin in the Second City, American Rose (an Indie Next pick), and, most recently, Liar, Temptress, Soldier, Spy, named one of the best books of 2014 by Library Journal, The Christian Science Monitor, and Amazon. A native of Philadelphia, she now lives in New York City.

The Book of Delights 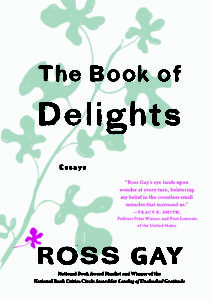 “Ross Gay’s eye lands upon wonder at every turn, bolstering my belief in the countless small miracles that surround us.” —Tracy K. Smith, Pulitzer Prize winner and U.S. Poet Laureate

The winner of the NBCC Award for Poetry offers up a spirited collection of short lyric essays, written daily over a tumultuous year, reminding us of the purpose and pleasure of praising, extolling, and celebrating ordinary wonders.

In The Book of Delights, one of today’s most original literary voices offers up a genre-defying volume of lyric essays written over one tumultuous year. The first nonfiction book from award-winning poet Ross Gay is a record of the small joys we often overlook in our busy lives. Among Gay’s funny, poetic, philosophical delights: a friend’s unabashed use of air quotes, cradling a tomato seedling aboard an airplane, the silent nod of acknowledgment between the only two black people in a room. But Gay never dismisses the complexities, even the terrors, of living in America as a black man or the ecological and psychic violence of our consumer culture or the loss of those he loves. More than anything other subject, though, Gay celebrates the beauty of the natural world – his garden, the flowers peeking out of the sidewalk, the hypnotic movements of a praying mantis.

The Book of Delights is about our shared bonds, and the rewards that come from a life closely observed. These remarkable pieces serve as a powerful and necessary reminder that we can, and should, stake out a space in our lives for delight. 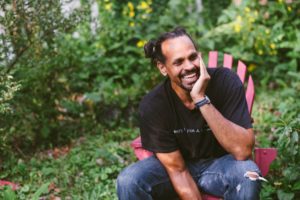 Ross Gay is the author of three books of poetry: Against Which; Bringing the Shovel Down; and Catalog of Unabashed Gratitude, winner of the 2015 National Book Critics Circle Award and the 2016 Kingsley Tufts Poetry Award. His collection of essays,The Book of Delights, was released by Algonquin Books in 2019.

Ross is the also the co-author, with Aimee Nezhukumatathil, of the chapbook “Lace and Pyrite: Letters from Two Gardens,” in addition to being co-author, with Richard Wehrenberg, Jr., of the chapbook, “River.”  He is a founding editor, with Karissa Chen and Patrick Rosal, of the online sports magazine Some Call it Ballin’, in addition to being an editor with the chapbook presses Q Avenue and Ledge Mule Press.  Ross is a founding board member of the Bloomington Community Orchard, a non-profit, free-fruit-for-all food justice and joy project. He has received fellowships from Cave Canem, the Bread Loaf Writer’s Conference, and the Guggenheim Foundation. Ross teaches at Indiana University.
Alice Hoffman

The World That We Knew 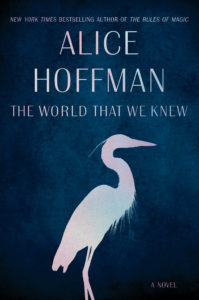 “An exceptionally voiced tale of deepest love and loss…one of [Hoffman’s] finest. WWII fiction has glutted the market, but Hoffman’s unique brand of magical realism and the beautiful, tender yet devastating way she explores her subject make this a standout.” —Booklist (starred review)

In 1941, during humanity’s darkest hour, three unforgettable young women must act with courage and love to survive, from the New York Times best-selling author of The Dovekeepers and The Marriage of Opposites, Alice Hoffman.

In Berlin, at the time when the world changed, Hanni Kohn knows she must send her twelve-year-old daughter away to save her from the Nazi regime. She finds her way to a renowned rabbi, but it’s his daughter, Ettie, who offers hope of salvation when she creates a mystical Jewish creature, a rare and unusual golem, who is sworn to protect Lea. Once Ava is brought to life, she and Lea and Ettie become eternally entwined, their paths fated to cross, their fortunes linked.

Lea and Ava travel from Paris, where Lea meets her soulmate, to a convent in western France known for its silver roses; from a school in a mountaintop village where three thousand Jews were saved. Meanwhile, Ettie is in hiding, waiting to become the fighter she’s destined to be.

What does it mean to lose your mother? How much can one person sacrifice for love? In a world where evil can be found at every turn, we meet remarkable characters that take us on a stunning journey of loss and resistance, the fantastical and the mortal, in a place where all roads lead past the Angel of Death and love is never-ending. 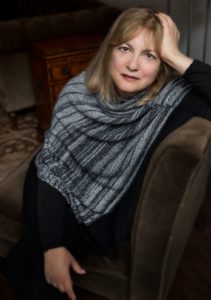 Alice Hoffman has published over thirty novels, three books of short fiction, and eight books for children and young adults. Her novel, Here on Earth, an Oprah Book Club choice, was a modern reworking of some of the themes of Emily Bronte’s masterpiece Wuthering Heights. Practical Magic was made into a Warner film starring Sandra Bullock and Nicole Kidman. Her novel, At Risk, which concerns a family dealing with AIDS, can be found on the reading lists of many universities, colleges and secondary schools. Hoffman’s advance from Local Girls, a collection of inter-related fictions about love and loss on Long Island, was donated to help create the Hoffman Breast Center at Mt. Auburn Hospital in Cambridge, MA. Hoffman has written a number of novels for young adults, including Aquamarine, Green Angel, and Green Witch. In 2007 Little Brown published the teen novel Incantation, a story about hidden Jews during the Spanish Inquisition, which Publishers Weekly chose as one of the best books of the year.

Hoffman’s work has been published in more than twenty translations and more than one hundred foreign editions. Her novels have received mention as notable books of the year by The New York Times, Entertainment Weekly, The Los Angeles Times, Library Journal, and People Magazine. She has also worked as a screenwriter and is the author of the original screenplay “Independence Day,” starring Kathleen Quinlan and Diane Wiest. Her teen novel Aquamarine was made into a film starring Emma Roberts. Her short fiction and non-fiction have appeared in The New York Times, The Boston Globe Magazine, Kenyon Review, The Los Angeles Times, Architectural Digest, Harvard Review, Ploughshares and other magazines.
​
Toni Morrison calls The Dovekeepers  “… a major contribution to twenty-first century literature.” The story of the survivors of Masada is considered by many to be Hoffman’s masterpiece. The New York Times bestselling novel was adapted for television in a 2015 miniseries.

​Her most recent novels have received many accolades, and are New York Times bestsellers. They include The Museum of Extraordinary Things, The Marriage of Opposites, and Faithful. Her newest novel, The Rules of Magic, is the prequel to her cult-classic Practical Magic. It was selected as a LibraryReads and IndieNext List Pick for October 2017 and is one of the Most Anticipated Books on iTunes. Reese Witherspoon picked it as her October 2017 Book Club read, remarking that the “story is full of magic, love, family, heartbreak and redemption.” Set in New York City at the cusp of the sixties, The Rules of Magic is a timeless story that reminds us that the only remedy for being human is to be true to yourself. Her new novel, The World That We Knew, is an exploration of humanity set in France during the Holocaust.

Nothing to See Here 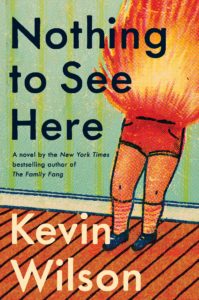 Lillian and Madison were unlikely roommates and yet inseparable friends at their elite boarding school. But then Lillian had to leave the school unexpectedly in the wake of a scandal and they’ve barely spoken since. Until now, when Lillian gets a letter from Madison pleading for her help.

Madison’s twin stepkids are moving in with her family and she wants Lillian to be their caretaker. However, there’s a catch: the twins spontaneously combust when they get agitated, flames igniting from their skin in a startling but beautiful way. Lillian is convinced Madison is pulling her leg, but it’s the truth.

Thinking of her dead-end life at home, the life that has consistently disappointed her, Lillian figures she has nothing to lose. Over the course of one humid, demanding summer, Lillian and the twins learn to trust each other—and stay cool—while also staying out of the way of Madison’s buttoned-up politician husband. Surprised by her own ingenuity yet unused to the intense feelings of protectiveness she feels for them, Lillian ultimately begins to accept that she needs these strange children as much as they need her—urgently and fiercely. Couldn’t this be the start of the amazing life she’d always hoped for?

With white-hot wit and a big, tender heart, Kevin Wilson has written his best book yet—a most unusual story of parental love. 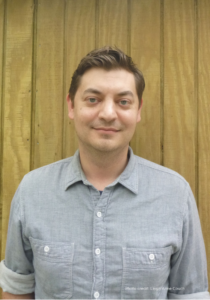 Kevin Wilson is the author of the collection, Tunneling to the Center of the Earth(Ecco/Harper Perennial, 2009), which received an Alex Award from the American Library Association and the Shirley Jackson Award, and two novels, The Family Fang (Ecco, 2011) and Perfect Little World (Ecco, 2017).  His fiction has appeared in Ploughshares, Tin House, One Story, A Public Space, and elsewhere, and has appeared in four volumes of the New Stories from the South: The Year’s Bestanthology as well as The PEN/O. Henry Prize Stories 2012.  He has received fellowships from the MacDowell Colony, Yaddo, Rivendell, and the KHN Center for the Arts.  He lives in Sewanee, Tennessee, with his wife, the poet Leigh Anne Couch, and his sons, Griff and Patch, where he is an Associate Professor in the English Department at Sewanee: The University of the South