“I respect (the Library’s) strong role in civic conversations.”

When the international architectural firm Snøhetta was selected to bring our community’s vision for Main Library to life in partnership with North Carolina-based Clark Nexsen, the excitement around the Library was palpable. A look at their portfolio of public spaces, including the Hunt Library at NC State University, the San Francisco Museum of Modern Art expansion, and the reconfiguration of Times Square’s pedestrian plaza explains why. We chatted with founding partner Craig Dykers and senior architect Nick Anderson and learned they’re excited too:

CMLF: What appeals to you about this project?
Snøhetta: That the library has chosen to make a new ‘Public Commons’ for the city within Charlotte’s current social context is really exciting – I respect their choice to take a strong role in the coming civic conversations. We are also working in a time when the role of libraries is significantly changing;  we hope to guide them to be of greatest benefit to the communities they serve now and in the future.

CMLF:  What inspires you?
Snøhetta: I am inspired by people who are able to make sublime experience out of common materials or create surprise from the familiar.

CMLF:  What do you want people to know about your design process?
Snøhetta: At its core, Snøhetta tries to improve lives by understanding how people interact with their surroundings and with each other. Incorporating that knowledge into our designs helps them to be more humane and to perform better; we don’t make generic spaces and we don’t make objects in a vacuum.

CMLF:  What is similar about our project to others you’ve worked on?
Snøhetta: Snøhetta has designed many libraries, so from a purely programmatic standpoint, we have a lot of experience with this building type. But what is most exciting is seeing something familiar in the library’s aspirations: the determination to make something bold that will have a lasting positive impact in the public realm.

CMLF:  What makes our project unique?
Snøhetta: The same things that make Charlotte unique will make our project unique. Instead of importing an inconsequential design identity we will be searching deep into the diversity of the city’s population, the colors and qualities of the landscape and seasonal changes unique to the area, and the vibrant cultural dynamic that has been so important in the history of the region connecting the great Smokey Mountains to the Piedmont and valleys of the Appalachians.

CMLF:  What special role can libraries play in creating great urban spaces?
Snøhetta: Even the interior of a library is an urban space so ensuring the connections between inside and out is very important for a successful design. Libraries allow people to collect in different size groups, both inside and out, and they should always seem appropriate for the visitor. Ancient libraries always were built with a clear connection to outdoor space. Knowledge is not limited to four walls and a ceiling.

CMLF:  What would you personally like to see in libraries that isn’t commonplace?
Snøhetta: An energy chamber, a place where you go to be invigorated. It’s not clear what that would look like, but it sounds like a good idea. It can be a place to get physical. Instead of sitting on a chair you sit under it? It would be filled with light and have good acoustics. There would be no television but there could be evolving light and sound art to keep each visit unique. It would be centrally located and the interior could be visible to anyone using the library even if they don’t use it.

CMLF:  What’s your favorite book?
Snøhetta: That’s like asking to choose your favorite child. I can say what I’ve enjoyed most recently. We are writing a book now called Collective Intuition that will be released at the end of this year, and our book on the new San Francisco Museum of Modern Art, titled What is a Museum Now?  was recently released. Other books that come to mind are of Emily Dickinson’s poems and the notebooks of Joseph Joubert. I also recently picked up The Alexandria Quartet again by Durrell. 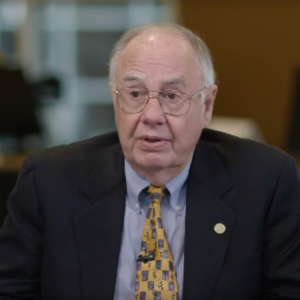 Why I Invest: Jim Woodward

CommonSpark
Why I Give

“critical to the future of what Charlotte will be” 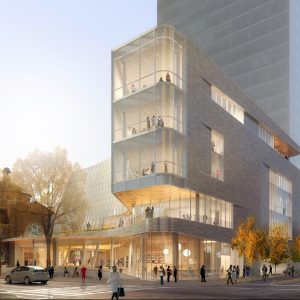 CommonSpark, Giving
Why I Give